After lots of discussion we chose to move forward with a pellet stove insert.

In a previous post, I stated “It was advised that 15-20 rows of brick will need to be taken down and re-built.”

Not sure if you can tell from these photos, but the bricks were crumbling on the outside.

Since we are going the route of the pellet stove insert – we do not need to re-build the chimney. Our fireplace was not in working order to burn wood. It had several broken flue tiles and could not operate. The chimney for an insert just serves as a ventilation system, so there isn’t a height requirement for a chimney stack. So we decided to enlist our good friend and mason, Dan, to take down our crumbly chimney to a safe height – in hopes to preserve it for use as our ventilation line. Dan said that once he removed some rows and could see inside the chimney that almost all of the tiles appear to be cracked – glad we ruled out trying to fix it back to a ‘normal’ fireplace. It would have been at least double the cost, maybe triple of the insert. (Big shout out to Dan for his help with this!) 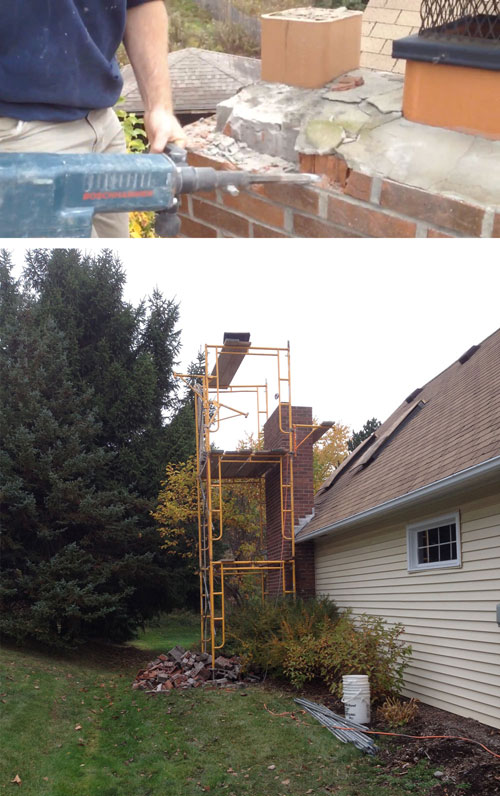 It started months ago and we were trying to decide what to do with the fireplace. We decided to go with the Harman Stove (P35i). pellet stove option for couple of reasons:

1. Its ease of use
2. Instead of wood (piles, drying, bugs, bringing inside) there are 40 lb bags of pellets that would be easier to buy/manage (I can do it myself!)
3. This solution seemed easy enough to install

We had to wait a little while longer to pick it up – our trim kit (the silver piece/decoration) was on backorder. 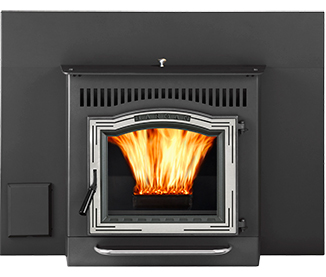 My husband, Mark, My father, Cliff and Dan were kind enough to install the fireplace insert. For the record the store we bought it from said it would be easy. And honestly we were just trying to save the money if possible by doing it ourselves. The biggest problem was the directions for installation were confusing. I’m sure an installer wouldn’t even need them after understanding what needs to be done, but they were very strange and confusing for first time installers. Once again, I didn’t install it, I take no credit here. I did have to run out and buy things that we thought we needed, only to use some of it, and having to return some of it. 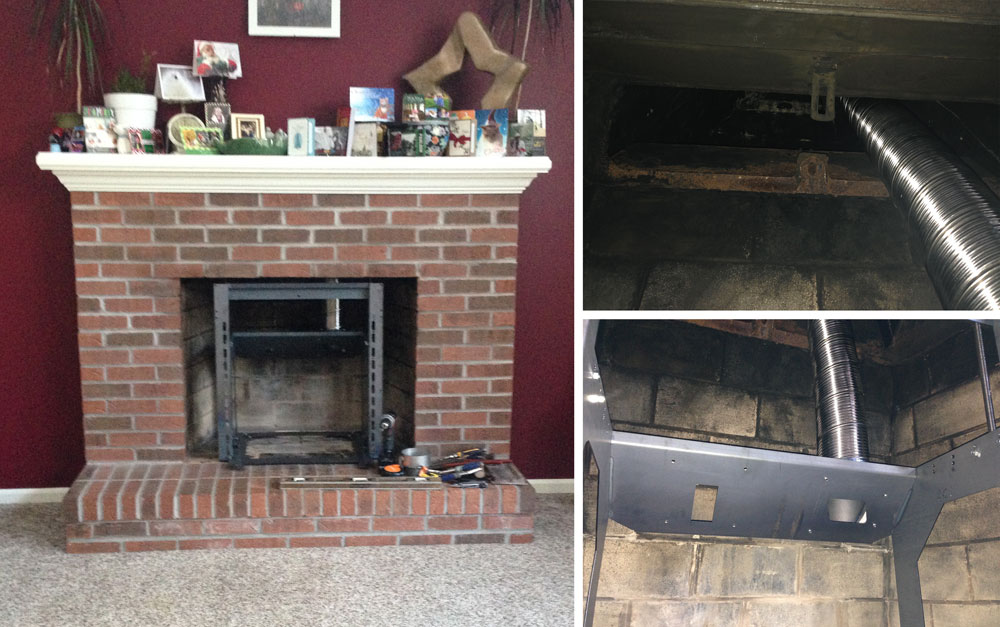 Once it was installed and we plugged it in, we were slightly disappointed to realize it sounded like it was whistling. I thought, “gee swell” – get it installed and now it whistles. We had the sales guy make a trip out and he was supposed to follow up with the manufacturer. At this point that was about a month ago and we haven’t heard back. Luckily somehow once we started using it – the whistle went away. The first time it only happened when it was turning off. I don’t think we have heard it since. Still, not cool that we never heard back from the store/manufacturer.

I am very happy with our decision and it has become a habit to turn it on when we get home from work at night. It heats up that room to a good temperature – but since it has the vaulted ceilings the heat doesn’t travel very far from that room.

As you can see in these photos everyone in the house is enjoying it!

Since we have moved in we have also invested in the sectional couch that I have had my eyes on from Raymour & Flanigan for the past year or two, the Artemis II. I am glad we waited until we moved, since the sectional would have been facing the other direction at the old house and most likely the smaller version. We have had this couch for a few months and I don’t have any complaints yet. I love how many people it can seat when we have a houseful of people (ie. Thanksgiving, Christmas). 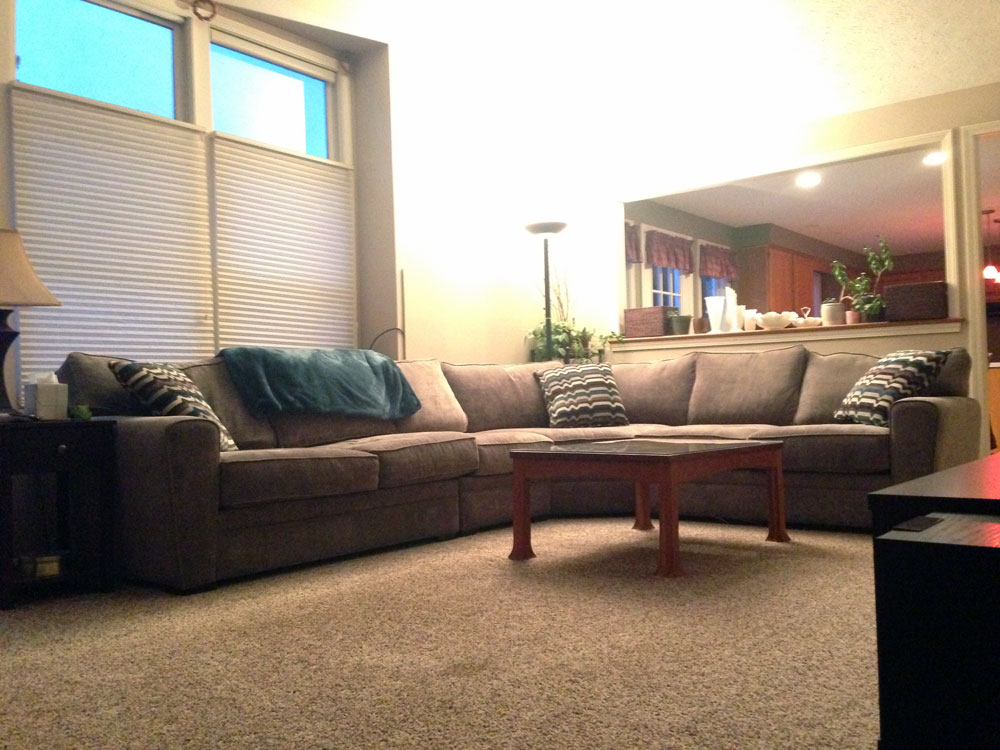 I still have more projects I want to do in this room, but all in good time.

A few things on my wishlist (in no particular order): painting the room (and ceilings), installing/building built-in shelves/cabinets on either side of the fireplace and someday replacing the windows and skylights to make them more energy efficient (and no broken seals/water marks). Things to be decided in the future – rip up carpet for hardwood floors, perhaps. The carpet happens to be my favorite of what’s in the house – but not totally sure it will go with the room once painted. The hardwood appears to be different than the rest of the house for some unknown reason (from the corner I peaked at). The other unknown is what to do with the fireplace decor… Leave the bricks as is, white wash them, paint them, try and figure out how to tile over them like they so often do in TV shows to make them look sleek and modern… 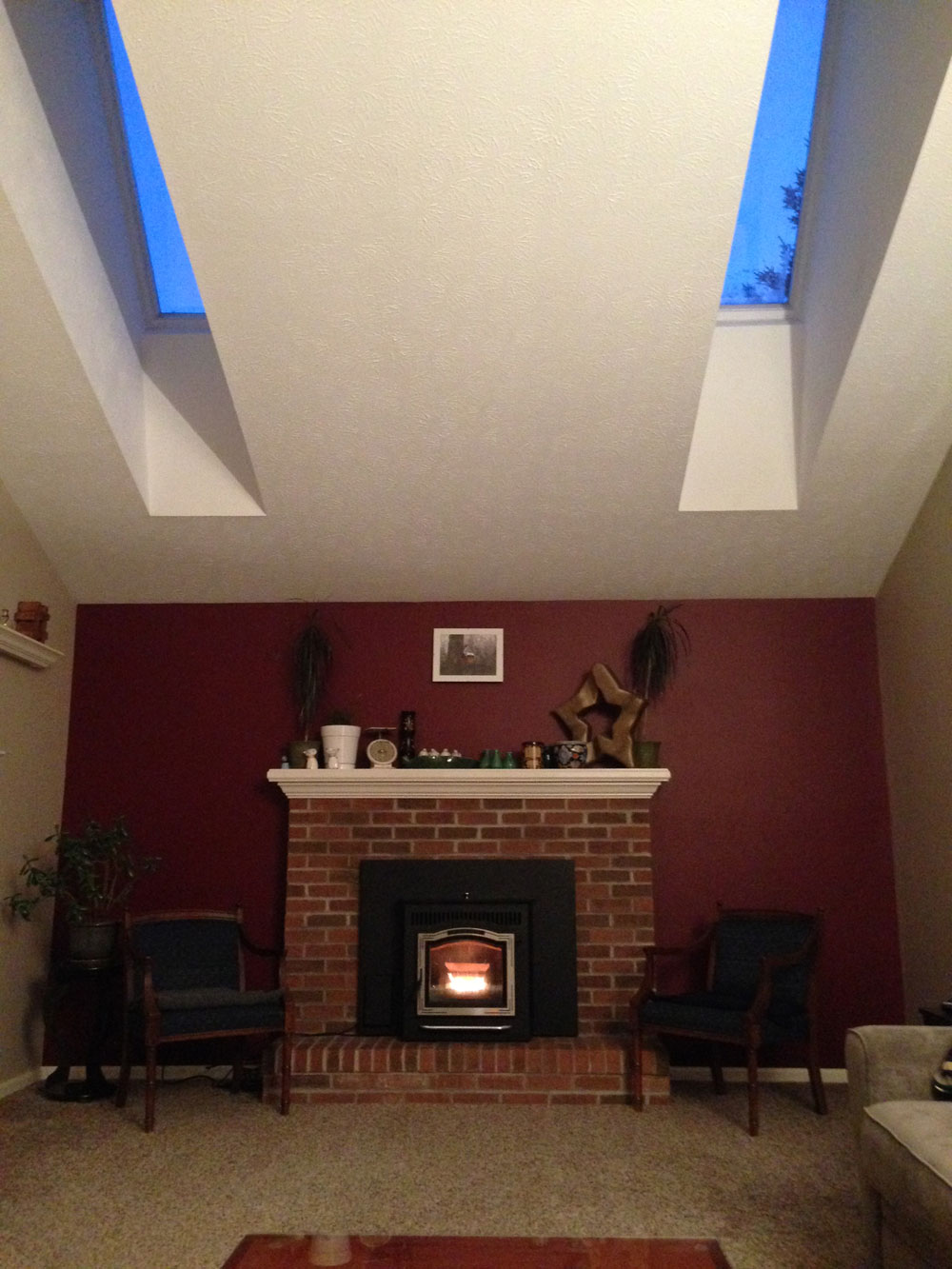 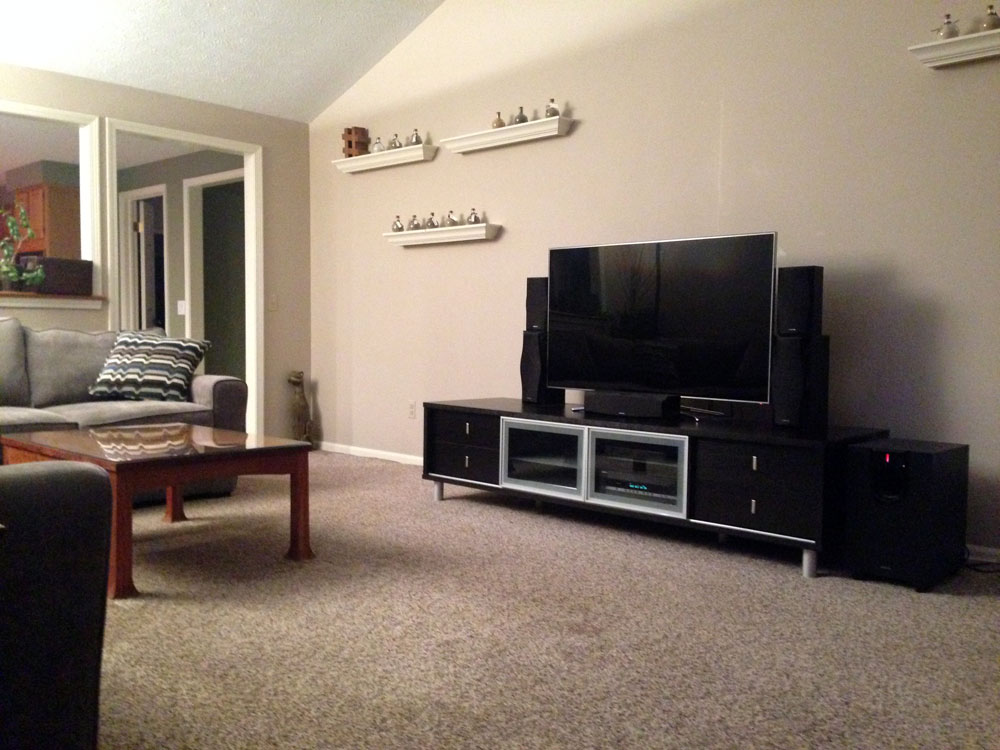 (We bought the TV stand for the old house to “fill” the 80-inch wall. This room is larger, but still love this TV stand. Still need to figure out exactly where our “surround sound” speakers will end up. Obviously, not very “surround” when they are all stacked up next to the TV.)

These are all just things to consider – certainly won’t decide now. I guess we’ll see in good time.