Last month my Grandfather, Gordon H. Jerome, passed away. (I found out the H. stands for Hofer I never knew that before, I believe it is a family name).

My Grandfather, Gordon, was born in Rochester, NY on May 16, 1926 to Ethel and Clifford Jerome. (I remember Ethel, my Great Grandma, she was alive until I was around 8 years old). He has 2 siblings: older sister, Geraldine (Gerry) and younger brother, Norman (Norm).

I don’t know a lot about his young life – he lived in Penfield, NY (according to the 1930s census). And my Great-Grandfather worked at Eastman Kodak Company. I found his employee card/payroll card in with my grandfathers photos, letters and memorabilias. I remember an Eastman Kodak Gold plague being at my Great Grandma’s house growing up – there was a real sense of pride working there. I don’t believe my great grandmother worked. I know she never got her drivers license because I always remember her telling us how she would walk to get her groceries and go to the post office. 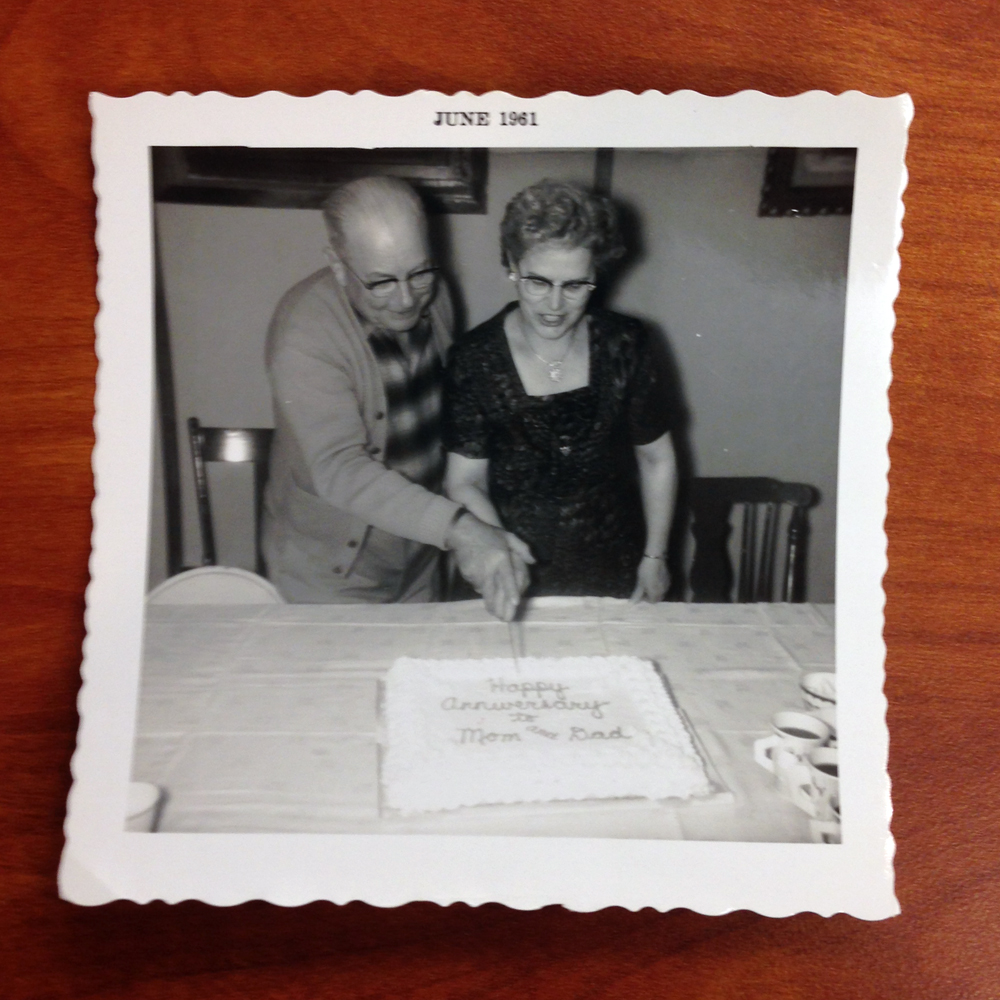 I know he played sports in High School – I saw a picture of him in his football jersey in a yearbook. He graduated from East High in Rochester, NY. He was enlisted/drafted in the Army for World War II on October 3, 1944. His military serial number is 42099575. My grandfather had earned 2 purple hearts in Japan during WWII. He actually still had shrapnel in his body and was more recently was complaining about pain from it. His dog tags show wear and tear from his time over there.

I’m not entirely sure years that certain things happened in his life. Hopefully with a little more research and talking to more family I will be able to fill in some blanks.

My grandfather was married before my Grandmother, to a lady named Jane. He always had a tattoo on his arm to prove that – but I never really knew anything more – and I never saw a photo until I went down to Florida for his funeral. My understanding is that they got married and then she ended up meeting someone else and they got it annulled. 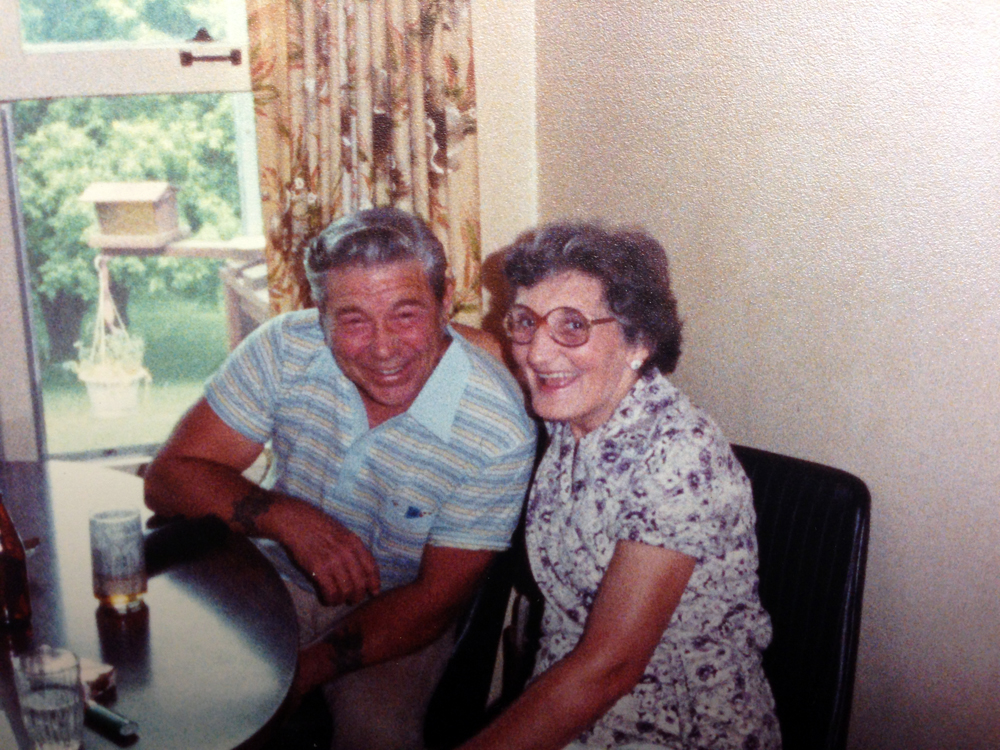 They had 6 children total, however Bruce Jerome (2/13/1950), the first boy, only lived for 4 months and 19 days before he passed away. He is buried somewhere in the Oakwood Cemetery in Penfield, NY (My Great-Grandparents are buried there as well).

They went on to have 5 more children, my 4 Aunts and my Dad. Christine Jerome, Jacquelyn (Michaud) Jerome, Clifford Jerome, Judy (Cogar) (Jerome) and Jerrie (Doerr) Jerome. Grandpa/Gordon work at the NY Department of Transportation (His ID/payroll card said “City of Rochester” on it) They grew up in Fairport, NY at 1518 E Whitney Rd. As I found on my Grandfathers old driver’s license. I heard they lived in the farmhouse at this address and eventually moved next door to the ranch house. They all went through the Fairport School System – and a few teachers remembered the Jerome kids when my sister and I went to school there. (I’ve heard some stories of jocks and troublemakers since then).

I’m not sure of everywhere they lived – but I vividly remember their house in Geneva, NY when I was growing up. They lived in an old farmhouse right on 5 & 20. By that point they only were in NY for the summer and then they went down to Ocala/Silver Springs area in the winter (as snow birds). The Geneva house was surrounded by farmland which included a hayloft (which we climbed, built forts in and typically just took over when we were there), fields, and at least one year there were goats and chickens. They also had a tree swing (actually on their land) and the house had 2 staircases inside – so we loved playing hide and seek or other tag type games because you could get away. It was a place where we got to meet up with our cousins and have a lot of fun.

In 1997 my Grandmother passed away (17 years before Grandpa). They were up here for the summer and her health went downhill. He had her transferred down to Florida in the Fall  of 1997 and in November she passed away. Only the children went down to Florida for her funeral. I remember being in High School at the time, She was my first grandparent that passed away.

After she passed away he ended up getting back in touch with Joan (Joanie), the lady who introduced my grandparents when they were young, and went to school with my Grandfather. She happened to also be widowed (3 or 4 times) and they spent some good years together. Unfortunately she had a stroke and then died a few year ago. 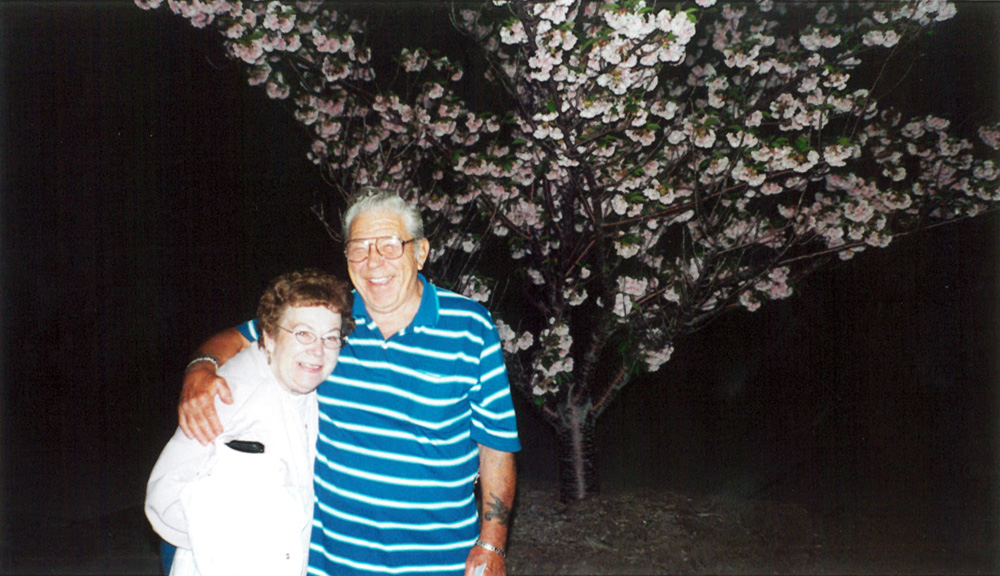 Gordon with Joanie in Springtime

We had a big surprise 80th birthday party in Geneva, NY on the lake. I believe that was the year he decided that he was going to go to Florida and then stay there – not coming back to NY in the summer anymore.

Most recently he lived right around the corner from his Brother down in Florida and his wife, Mary (and their dog Silver). They were close and were trying to convince my Grandfather to tag along with them this Summer when they pack up and travel around the country to visit family and friends in their mobile home. It sounded like they almost had him convinced.

Ultimately my Grandfather’s life was not always the easiest, but the Grandpa I knew always was smiling and laughing. He lived the way he wanted to. He was the last of my living Grandparents and he lived a long life (lived to 87 – 2 months shy of 88).  He was definitely loved and will be missed.

I made this slideshow/video before I went down to Florida for the funeral and had access to tons more photos. I still think it was really great to capture some moments through the years (there is no sound – music was added at the service). 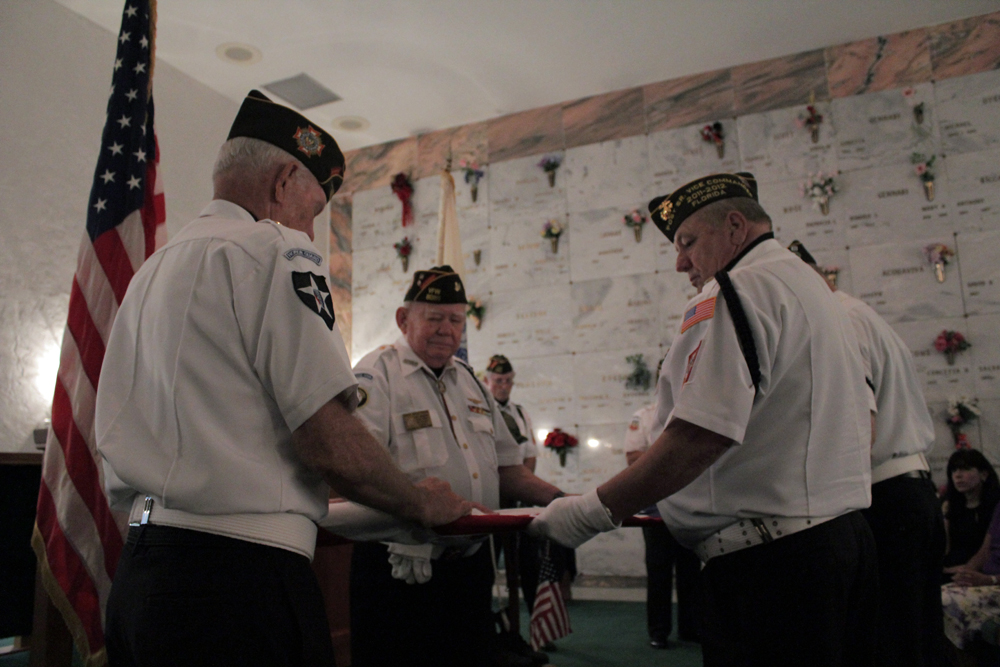 Here is his obituary as it appeared online: Gordon H. Jerome, who was born in Rochester, Monroe County, New York and later lived in Fairport, NY, died March 16, 2014, at his home in Silver Springs, Marion County, Florida. He was 87. He was the son of Ethel and Clifford Jerome. Survivors included his children: Christine Jerome of Rochester, NY; Jacquelyn Michaud (Leonard) of Palmyra, VA; Clifford Jerome (Sherri) of Fairport, NY; Judy Cogar (James) of Auburn, NY; and Jerrie Doerr (Michael) of Lewiston, ME. Other survivors were his sister, Geraldine Greene of Penfield, NY, and his brother, Norman Jerome (Mary) of Silver Springs, FL, as well as many grandchildren, great grandchildren, nieces, nephews and cousins. “Gordy” was predeceased by his wife, Mary. He served in the US Army during WWII where he received two Purple Hearts. He retired from the NY Department of Transportation. He had lived in central Florida since 1982. The celebration of his life was held at the Forest Assembly of God in Silver Springs, and interment took place at Good Shepherd Memorial Gardens.